The Art Of Being Invisible – Colin Hambrook 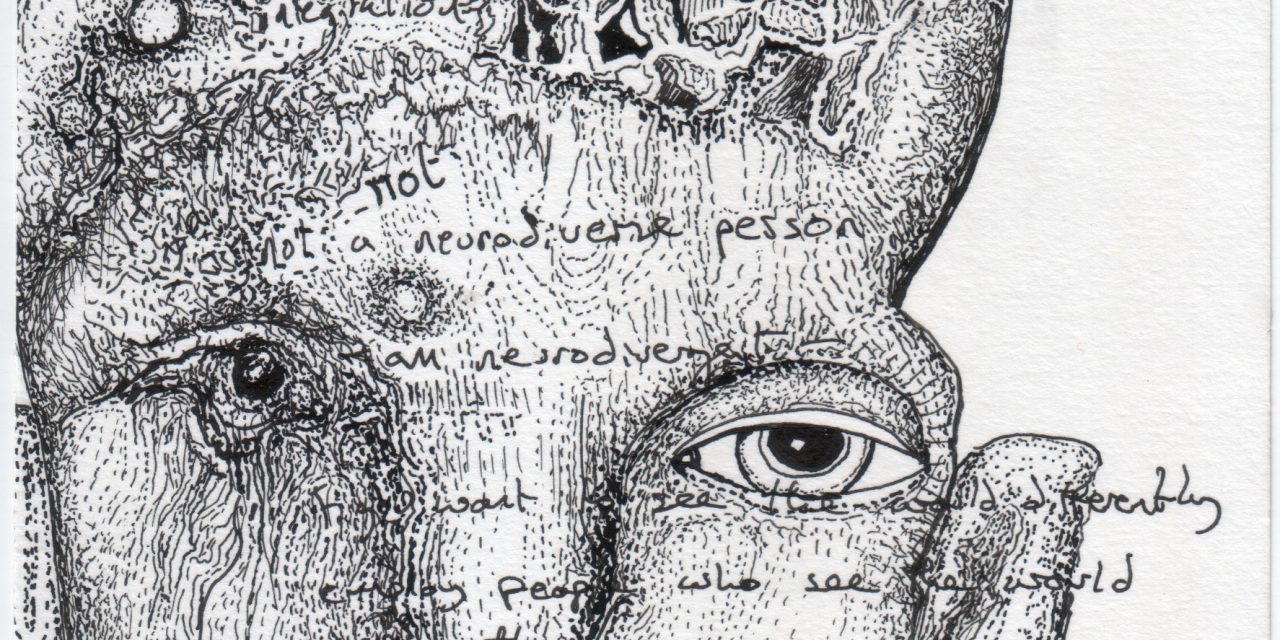 The Art of Being Invisible by Colin Hambrook is a powerful  account of a fragment from his own childhood, a shard which marks one for life. Such scars may not always be visible but they are always there every single day.  The process of writing and drawing can at times be cathartic, they can also reveal to others some insight into another’s personal experience.  For me his words provide the factual framework for his stunning emotive imagery which is intoxicating, beautiful and painful. Making what was once invisible to the world visible. BG

I was ten years old when the Psychiatric authorities came to take my mother away. I was
interrogated alone in my bedroom by an intimidating, white, middle-aged, male psychiatrist
who promised me he would cure her. He asked a litany of questions wanting to know what
mum had been saying and to whom – and even at the time I was partially aware of being
coerced into the most brutal betrayal. 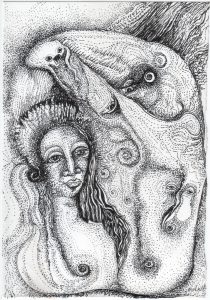 He took her away to the gothic Victorian spires of Belmont Hospital and subjected her to so
much ECT that when we went to visit her she didn’t recognise her own children. I have a
distinct memory of walking in the grounds of the asylum and having a strong physical
sensation of being thrown into a gap, down into the centre of the earth. And there was a
hole where being and possibility and potential should sit in the heart of a boy of ten.
The mother I had known died that day and I went into a process of grieving for her. She had
been taken from me. And like many children who lose a parent to death, I believed it was
my fault; that I was to blame. But, of course my mother was not dead, just gone… and there
were no words of explanation or resolution for what I was experiencing.
And when on the cusp of becoming a teenager I experienced my first full-blown psychosis
after a head injury. At the heart of my disordered thought processes was the belief that I
was invisible, literally invisible to the eye and to the ear. And I was invisible, in the way that
all children of psychiatric cases are made invisible by a system that further problematises
the parenthood of people with mental illness.

My grief was invisible within societies disabling constructs that discriminate and ‘other’ individuals scapegoated as mentally ill.
When my headmaster raised concerns and sent letters home advising I be seen by
professionals, I managed to intervene and throw the letters away. The last thing I needed
was further torture to add to the existential crisis I lived with on a daily basis.
I found my own ways of coping with the mental illness that inhabited me. There was no-one
I could talk to or trust. I had no words anyway for the attendant disconnection between my
head, my heart and how I was feeling. Intuitively, I painted what it felt like to be invisible. I
made several self-portraits – one in particular was of two empty, opaque glass cylinders
representing my self, hanging by chains, side by side in a limbo against a dirty blue sea and
sky. Mid-point was a setting sun, the place where nothing mattered, as all was in a state of
chaos. 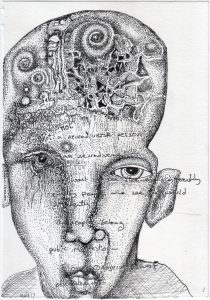 The act of making the painting didn’t change my abject fear and horror of what could
happen to me because of the ignorance and nascent malevolence within the power of the
medical authorities, but it gave me some distance from the intensity of the emotions I had
no control over. It was a visual portrayal of my ontological state. And through that distance
came some sense that I didn’t have to believe: I didn’t have to believe myself. And that was
a crucial step in not being a slave to the compulsions that I was in the grip of. I learnt to tell
the voices crowding in on me that they weren’t true, because nothing was true.

The one and only person who valued and encouraged my painting was mum, who despite
and maybe because of her mental illness understood what I was suffering and advised me
repeatedly to paint it out.
And now 50 years later my continued struggle for ontological strength is defined by the part
of me that was lost that day somewhere down a lightning crack in the earth… a search for
Fools&#39; Gold – the journey to recover from devastation… to find the soul… Fools’ Gold, iron
fire, a source of ignition, the folly of answers, identity and parade… all that glisters.
And why is human frailty understood by medical science in binary terms? Either you have a
mental illness or you don’t – as if consciousness can be measured by degrees. The wounded
healer implies an element of wounding endemic within us all, however that manifests…
Fools’ Gold, the gold of fools turning weakness to strength… and the alchemy of ideas turns
the social model that stands in contradistinction to the medical ‘cure’– the answer of men
dressed up as gods.
Meanwhile I define myself as disabled by a Psychiatry that demands my continued
invisibility, dealing with self-awareness in pejorative terms that establish the conditions for
creating further mental distress. 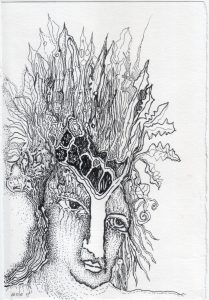 Fish Eye and The Mirror

He is thrown into a gap, down to the centre of the earth,
opening like a womb down to the core of creation.
And all is empty, wiped clean as dust,
a silent place of shadow, shovelled-up
with the hubris of centuries of certainty
that the place of the mad is secure…
He is an ocean. He is an ocean raised in air
and living in a bubble below the surface of things.
He is a bright sea extending the full wrap of the orb of the earth
and to the edges of the wind.
He is yesterday. He is tomorrow and all spaces in between.
And he is not these things.
He is the deepest breath – one that seems never to stop filling the lungs.
And he is an even longer out-breath.
He is the rattling cry of the corvid
reaching to break the chains of this moment
and to take in the ocean of generations back and back
to the time when hydrogen and oxygen first decided to mate,
the primary coupling of matter.
He is the birth of spirit into the tearless cry of new-born life.
He is the centre and the periphery.
He is the melancholy grace of the wings of the Whooping Crane,
the sail of the Sea Swallow, the Starling and the Dunlin.

He is a Salmon pushing up-river and all living things searching for grace.
He is without boundary. He is everything and all time and he is nothing.
He is of no consequence, less than a single beat in the story of knowledge.
He is the roar of flame at the core of the groaning planet
turning as a restless foetus seeking revelation
in the womb of its mother.
He is a whisper of red, the all-consuming passion
at the start and end of it all. 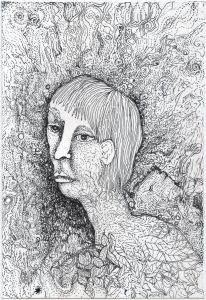 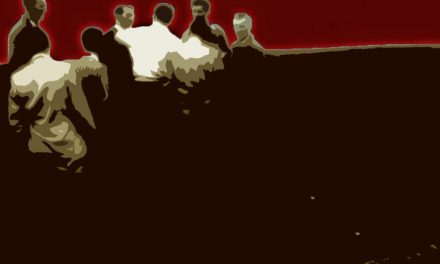 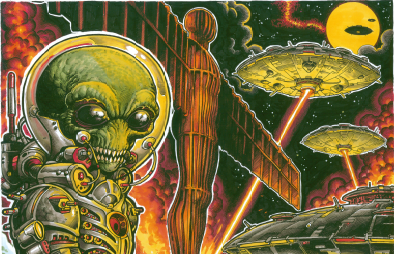 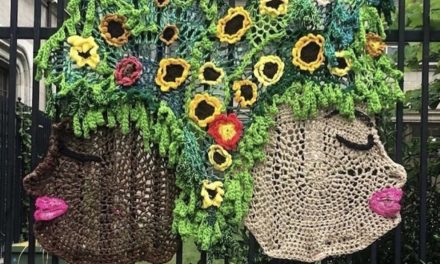 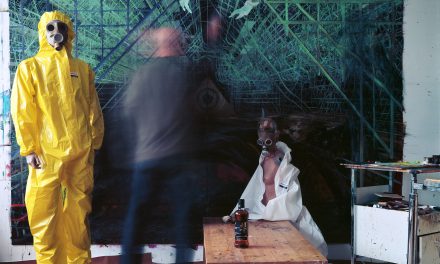