Well, well, well ….here we are at issue 4 , and its right down (or is is up) your street,  cram packed with that goodly mixture of  art and music with a basket or two  of literary accouterments to whet your appetite.

Thanks and apologies,  firstly to the many people who support us,  the readers, writers and artist happy to journey awhile in our neighbourhood  ..its much appreciated. Secondly, one of the joys of living  with dyslexia ( as I do ) is that over time it becomes  possible to recognise the difference between the helpful, as opposed to the  smarmy folk  who point out typos . Thankfully I only know  the helpful , having said that, two spelling errors did manage to make their way to the final print. Perhaps a Spot the Typo competition  in the issue 5 ? Bedevilment also occupied one or two low resolution images in odd feature due to …… your answer on a postcard please .  Fail Better I say.

Best read and not shaken.  We launched a night or so after the clocks went back to some darker place at the close of September. Such fun was had, courtesy of  a man called Tom who is running a new place called  The Drawing Rooms , a curious and quirky  venture hidden  in the corridor streets in the heart of Bath. Primarily it runs as a club  /hub workspace  but Tom also  which runs events and workshops, which gives it an edge over the usual hot desk sites which love to pander to values of  the new tech elitism .  A  neon sign above the bar reads “This must be the place” and maybe it is. The bar leads onto series of richly decorated Georgian rooms  of varying sizes and designs  and in the name of inclusive creativity we are fortunate in having the whole place to ourselves for the evening .

Alongside the usual Deviation Street tenets , we are treated to a wealth of vinyl, thanks to Paul of Buzzsaw records. I took a particular liking to  Holistic Love, a beautifully packaged  coloured 10 inch disc by French band Visage Pale. If Stereolab  floats both your  boat and your curiosity  then check  out Visage Pale and  of course visit Buzzsaw Records c/o  https://www.buzzsawrecords.co.uk/ 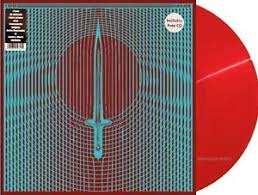 Many delightful and unfamiliar sounds (at least to me ) were being spun including the recent ruby red vinyl  L’Epee , a cross continental collaboration that includes the guitar of Anton Newcombe   ( Brian Jonestown Massacre ) and vocals of Emmanuelle Seigner (The Limanans) its one of those albums , like a teenage crush, where you fall in love, at the first encounter,  full of glorious 60s sounds for the present day . As the evening drew on  there was a shift towards more familiar ground in the form of Siouxsie and the Banshees  1981 album Juju and some unadulterated Serge Gainsbourg, there may even have been some mid 70’s Bryan Ferry or Roxy Music in there but perhaps I just imagined that last bit.

Another room, another face,  Gryorgy Heyei  brought  3 classy electric guitars along with an amp. I am no guitar buff , I know a Washburn from a Fender from a Martin from a  Gibson  but that’s about it . Gryorgy on the other hand is a guy who knows his stuff, basically he provides curation and consultations on electric guitars (maybe acoustic too) For the launch he brings along a local custom built beauty  by Lissilla Guitars

plus a long neck fender which even for someone like me was a pleasure just to mess around with and another customised SG style 6 string  and I wasn’t the only one trying these guitars out, a little earlier a talented teen had been playing an assortment of accomplished  riffs, which sounded great. A couple from Stoke had come up the stairwell because they heard the sound of Black Flag in the street, coming out an open window .

In another corner, an ad hoc stall courtesy of  Magalleria displaying a range of  music related ephemera, if only I had more money . They have some really interesting publications  from Adbusters to Ziet Magazin  as well as including Deviation Street and another broadsheet which goes by the name of Good Trouble .. , well worth a read along with  countless others that  accommodate  a range of taste . Visit their website https://store.magalleria.co.uk/ or better still visit in person if in town.

All good stuff  and as for Deviation Street 4 its out now and available from Magalleria and via The Arnolfini book shop in Bristol  https://arnolfini.org.uk/visit/bookshop/

Some great features including an interview with NY Disco era photographer Meryl Meisler who captured the night life glamour alongside the dereliction of Bushwick Brooklyn a Tale of Two cities indeed , we also have a feature by Den Browne on fellow student and friend Tony Wilson with some rare images of him sporting some rather long hair .  We also have reviews and an archival interview from 1977 with Generation X guitarist Tony James . Artists Broose Dickinson , Kate Bradley and Antony  Stevens feature too along with Jonas Golland and Dmitry Sokolenko