The British seaside is a land where cheap holidays, economic decline and bad weather spring to mind. There is a remoteness, a being backed into the perimeters that seems to attract – or imprison – those who cannot belong in the centre. And yet, perhaps our edges are not so distant. On this tiny island one is never more than seventy miles from the coast. See this as a limitation or a liberation as you will.

Margate, better than anywhere else I can think of, illustrates the decline and regeneration that the British seaside has seen. Tracey Emin, reared famously in Margate, has spoken of the rebooting of the town. “Margate is hip, it’s better than Shoreditch because it’s got the sea, it’s so beautiful. But it’s kind of rough, it’s gritty, it’s not a twee seaside town, it’s got a bit of guts to it.” In fact, she’s returning to open a studio for herself.

The Turner Contemporary is the icon of Margate’s new lease of life and so I headed back to the motherland to check it out.

The exhibition (which was the Turner’s first photographic exhibition) was exquisitely curated, handling gender, family, class and social progress in a carefully balanced style. Iain Mckell, who found inspiration in Diane Arbus, took up his camera aged 19 in 1973 and took a job photographing holiday makers in his hometown of Weymouth. Today, his photograph ‘In the Gutter, Blackpool’ shows the good-time girls of the coast.

You can almost hear the seagulls giving their 3am wake-up call. A world away from the 1850s Victorian family portraits on the adjacent wall where holiday makers in all their finery are hooting at the novelty of perching themselves on prop motorcycles.

Barry Lewis’ collection of ‘Butlin’s Holiday Camp, Skegness, Summer 1982’ depicted a different side altogether. It shows the flocking, the natural draw of the masses to the seaside. The combined stickiness of icecream and suncream and backs of knees on plastic chairs. The tactics of eating chips in the vicinity of gulls, navigating a bikini change underneath a beach towel; it’s all a skill-set. Lewis’ sun-burnt campers reveal, bizarrely, a side to summer I feel I was present for. As the walls continue alone we are sent forth from the Mods of the 1960s to the alternative travellers of the 1990s. Time at the seaside is never normal. 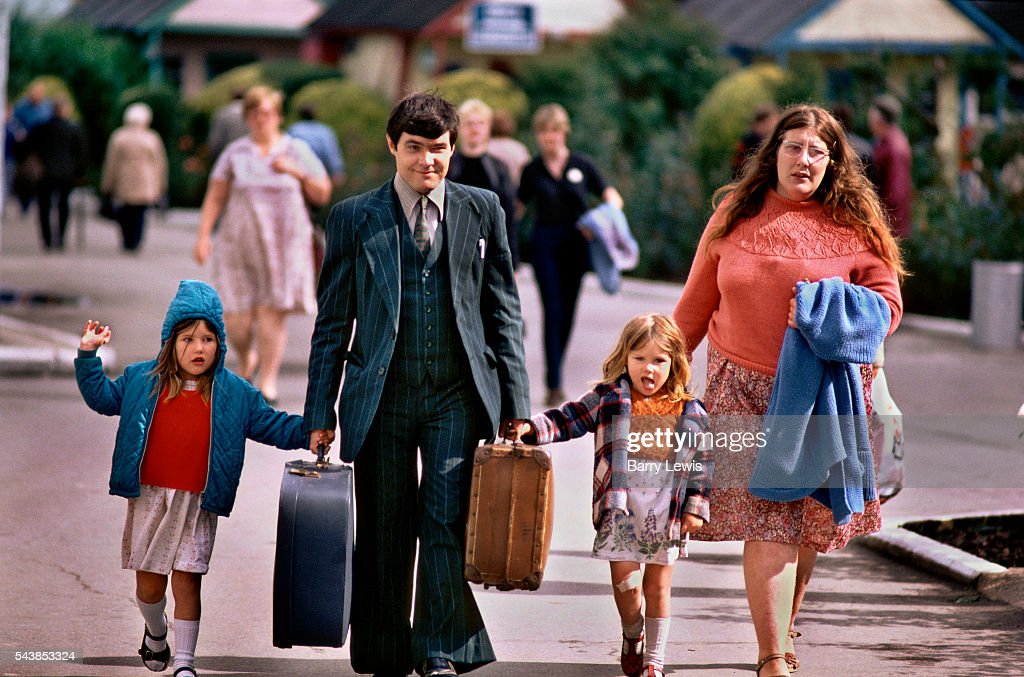 From Enzo Ragazzini’s documentation of the 1970 Isle of Wight Festival to Stuart Griffith’s photographs of ‘Illegal Ravers at Black and Ovingdean’ where he stood, in his words, with 2 black eyes on a cliff edge trying to capture the scene. The sea itself hardly makes an appearance, but its presence is felt throughout every photograph. The rush and strangeness it stirs. The ever-changing, ever-sameness draws every photograph together as one collective on our island’s jagged edge.

“At the edge of the land there is a fraying and a fragmenting where land meets sea. Though some seaside resorts have managed to revive and accommodate a new kind of visitor, many are still precarious places, with shifting populations and seasonal declines. Everything by the sea becomes frayed, by salt and wind, by melancholy and memories. But when the sun shines and the crowds come, the ragged edges are less discernible and the beach becomes a democratic space where we eat, sleep, think and recover.’

There is still time to catch Seaside Photographed at the Turner Contemporary before 8th September.

Seaside Photographed available for £19.95 at https://shop.turnercontemporary.org/products/seaside-photographed-catalogue