Skip to content
Many thanks to Artist and Writer Natalie Parsley  for this article on the recent work of John Akomfrah . We look forward to running a feature on Natalie’s own work  in the near future . You can visit her own blog via http://spannerintheworkz.blogspot.co.uk/

It would be both wonderful and daunting at the same time to have access to the amounts of archive footage and hand-directed footage that John Akomfrah has to wield with for creating his multiple screen-based works. Selecting, cutting and editing together their sound and time becomes a collage of multiple moving images and stories that are testament to the role of the director as both artist and editor. The Russian film director, Tarkovsky described filmmaking as ‘sculpting in time’ and every opportunity when I experience seeing Akomfrah’s work, that is almost certainly the impression one gets! A point I have mentioned here on this blog before, click here. I’ll never get tired of it, it’s a great analogy that highlights the often hidden or unnoticed role of the filmmaker who is responsible for both the physical and metal process of editing with the illusionary concept of time when it is captured on film. 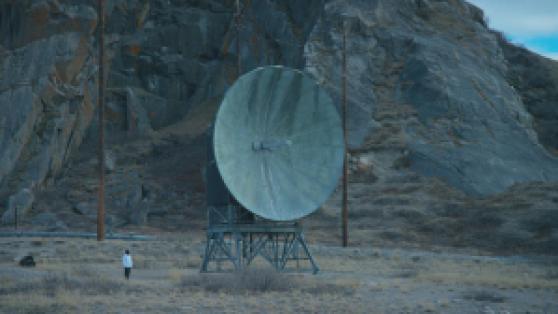 It would be safe to assume that I am a fan of film and Akomfrah’s work, his films are incredibly well crafted technically and hold a conscious and visual resonance that retains attention and holds in your memory long after experiencing them. Even more amazingly, his films are almost always shown in places where they can be experienced for free! On this occasion I discovered his latest work, ‘Purple’ [2017] at The Barbican in London completely by chance. Featuring archive footage, footage shot across ten countries and shown across six screens simultaneously, ‘Purple’ at approx. and hour long and told over six movements is as complex visually, audially and conceptually as it is momentous. ‘Purple’ ambitiously expands upon ideas of global environmental concern touched briefly upon in Akomfrah’s previous work,‘Vertigo Sea’ [2016] where now ideas of; ‘planetary relationality and rendering our mutual ecological devastation, both recent past and present’ are presented through histories of human progression from birth to death; the steam engine to artificial intelligence, nuclear power, medicine and more. Something I later find out is called the Anthropocene, which loosely refers to the,“proposed epoch dating from the commencement of significant human impact on the Earth’s geology and ecosystems”. Armed with that knowledge it is easier to understand, for example why‘Purple’ includes references to the atom bomb, for example of a human impact on radiation in soil. It isn’t all cheery stuff, nearly every human development features a knock-on negative impact for what it does to the planet, but it is incredibly moving and has moments of great beauty that enforce a message of the cruciality of how we arrived at our current situation and the importance of realising how we will continue to have an impact on the environment unless we change as well as what we possibly stand to lose. It does so without being too preachy in its tone; science and industry are referenced in a way that both highlights how humankind has progressed without commenting on whether for good or bad but calls upon a sense of collective responsibility for how those developments have led to further ways/means (such as war) which in-turn have blighted or poisoned our landscapes. I would go as far to say that one couldn’t after watching it all, leave without feeling something!

In her essay on John Akomfrah’s ‘Purple’ being shown at The Barbican in London, Professor in Cinema Studies, Kass Banning alludes to the title of the work with lines from Jimi Hendrix’s song ‘Purple Haze’. Though the two aren’t deliberately related, it is a fantastically apt observation and conicidence to make the relationship between the lyric in Purple Haze, “Is it tomorrow, or just the end of time.” with the sense of urgency versus deferred responsibility.

At whatever point the viewer enters this work they are at once assaulted with a wealth of visually stunning or arresting images that both accentuates the scale and sense of helplessness or global unity (depending on how you want to interpret it) the deeper references only begin to become more processable after spending some time with the work. Some screens show slow sustained shots of people standing transfixed by some unknown cause gazing or contemplating meditatively outwards into the landscape threatened by an impending man-made ecological disaster; a familiar motif in Akomfrah’s work that helps create a sense of contemplation and stillness to the otherwise emotive imagery being shown on other screens. It is also a reference that the artist states, to the German painter, Caspar David Friedrich who was amongst the first to place the single figure into the landscape giving Man a greater sense of connection or wider sense of totality and the sublime to the environment, “Romantic subject of man with a capital ‘M’ had the ability to access the world in the absence of the Almighty”. In that way aspects of faith, science and humanities relationship with the environment are intrinsically linked in this work.

Elsewhere waves undulate, huskies pull a sleigh, jellyfish float in peaceful green seas like translucent slices of cucumber, dancers perform in films by Ken Russell, a man undergoes hypnosis, bicycles are made in factories and ridden around English industrialised streets of the 1940s, cattle and chickens are farmed, ‘worker-bee-like office workers dash around in frenzied formation’, storms rage and stillness reigns over seas. It is an insane list of imagery that does it no favours describing it all here, but whose juxtaposition curated against quotes from Alfred Lord Tennyson’s poem ‘In Memoriam AHH’ [1849], shots of people and water flowing (a metaphor for the passing of time and also reference to the melting of polar icecaps) across photographs alludes to the temporary nature and flux of our own lives as individuals on the planet and the bigger picture of us as a species. [Coincidently, the title ‘Purple’ referring to the purple colouring used to dye the running water, possibly significant of pollution/toxicity, is a reference to the vertigo of his other film, ‘Vertigo Sea’and is also a colour present in many of the shots.] The locations of trees, mountain-scapes and vast fields overshadowed by cooling-towers or used tyres or cannisters is both sickeningly overwhelming as it is beautiful. As Akmofrah himself states, “You can’t watch Mirror (1975) by Andrei Tarkovsky without being aware that this is a project trying to deal with really uncomfortable stuff. You find out later that it’s about his father leaving his mother to go fight in the Second World War and people making enormous sacrifices. The difficulty lies precisely at the junction between something that is incredibly beautiful to you and absolutely terrifying at the same time.” In that way it reminds me of the documentary films by Chilean directorPatricio Guzmán, whose films ‘The Pearl Button’ [2015] and ‘Nostalgia for the Light’ [2010] or‘Behemoth’ [2015] about the Chinese coal industry who both use literary references, poetic metaphor and visuals to frame the difficult and shocking revelations made in the work as a documentary. It would be impossible not to reference Godfrey Reggio’s ‘Koyaanisqatsi’ [1982] whose footage of global phenomena focusing on nature, humanity and the relationship between them to which Akmofrah’s work feels like a continuation of or reminder for the current generation that these issues are still relevant if not more so than ever.

John Akomfrah’s ‘Purple’ is on for FREE at The Curve, Barbican Centre until January 7th 2018https://www.barbican.org.uk/john-akomfrah-purple
Hidden Depths of Vertigo Sea

*Quotes and text used from the Barbican Publication accompanying this exhibition with essay by Kass Banning and interview with John Akomfrah by Ekow Eshun [2017].
**Images from https://tankmagazine.com/tank/2017/10/john-akomfrah/ ,https://www.cornerhousepublications.org/publications/john-akomfrah-purple/  and  https://www.barbican.org.uk/whats-on/2017/event/john-akomfrah-purple
Natalie Parsley http://spannerintheworkz.blogspot.co.uk/