In case you missed it – Deviation Street is taking a look back at an exhibition that was held at the Grant Bradley Gallery in 2016 by Mandy Webb titled ‘Addressing the Situation’.
Putting together a body of work and then exhibiting it in its entirety, is no easy task – it takes a lot of time, effort and energy, basically hard graft – such is the structure of what goes unseen prior to the exhibition itself.

I was able to catch the show on a miserable, blustery, wet winter’s evening in Bristol. Once inside the gallery however, the hunched up vibe of outside soon changed into what appeared to encapsulate all the finesse of a splendid, period ballroom dance.

A closer look revealed  a series of mannequins and heads elegantly dressed with layer upon layer of attitude. I was impressed, not only by the amount of sheer hard work that had gone into this show, but also with the quality of creative thought, craft and detail behind each piece of work, making this one women show such a fabulous creation.

I was able to contact Mandy more recently and ask her about the exhibition and if there was any particular music that she was listening to during the creation of the work.  She told me that one song in particular stood out for her whilst making a film of her work  – Roxy Music’s “Do The Strand ” from their second album “For Your Pleasure” as it seemed so apt to be playing something that was part of her  growing up. What follows are her words…BG

To be able to ‘go home’ with something I was proud of was one of my finest achievements. I had moved away from Bath in 1982 as a 15 year old, even though growing up in Bitton and Bath hadn’t been a chocolate box of good memories, it had really shaped me into the person that I am now and I am thankful of it and will always regard it warmly and as home. I had always wanted to be able to exhibit in Bristol, and was so fortunate to find the wonderful gem of the Grant Bradley Gallery in Bedminster. A favourite Aunt had lived in that area, probably one of the nicest people I’d met as a youngster, so I wanted to be able to honour her with my ever evolving collection of work. This work started around 2012 with the remaking of ‘The Red Ribbon Dress’ a piece dedicated to the many people that have lost their lives due to the complications caused by the HIV Virus and AIDS. I had nearly succumbed to this awful disease, but luckily I am a survivor of it and it changed my life, it gave me a kick up the arse and made me realise what was important and what I now needed to do with my time, time was now certainly precious and it couldn’t be wasted!

The collection of work comprises of dresses . ‘The Dress/Gown became my new canvas , people seemed to take a lot more notice of the pieces when they were created as wearable art. I also thought they wouldn’t take up as much room in my  council flat but it was getting fuller by the day, I hadn’t taken into consideration that I needed mannequins to display them on and huge netted petticoats to be able to show them in the best way possible. The exhibition showed many pieces that have been inspired by my HIV Positive status, these pieces have images of Factor 8 Clotting bags, watches, Condoms to a hand painted statement about living as a female with HIV in 2013 and what was it like?

This had also been published on a HIV Forum site on the web, I had said I would be proud to wear my words from my very honest statement…and I did! Other dresses/gowns are inspired by my determination to get as many Female Artists/Composers/Suffragettes names out there as possible. These woman were all really exceptionally talented for their time in history but as it says ‘his-tory’ they were sadly and shamefully omitted from school/university syllabuses, I am now determined to get as many of their names out there to honour them all. The Suffragette gown has rosettes covering it, these are names that were hand stitched on a handkerchief to highlight the many woman that were imprisoned and force fed, many died from their cruel and unjust treatments.

A Mourning Gown that harks back to Victorian times hides under its many panels of lace, dates of peoples deaths stamped onto white silhouettes that adorn the piece. I didn’t want to write names as wanted to respect the privacy of families that have been affected by the untimely deaths that this dress represents, these deaths are due to the cruel and unjust Work Capability Assessments and Sanctions due to the department of Social Security. I have only uncovered around 150 dates of death and names all recorded in a separate book, sadly the numbers are in the thousands, these people need justice, they need to be remembered!

Another dress was created after the Tories got back into power in 2015, the dress is made in true austerity style, it has been made of many off cuts of old material from previous work, made as cheaply as possible but worn proudly at the Demonstration in London to show my disgust and anger of the outcome of that vote!

Panty Pads, where do I start? Angered by the ‘Luxury Tax’ on Feminine sanitary products, I decided back in 2006 to create a ‘Luxury Collection’ consisting of many items made from Panty Pads, these items include Chanel styled handbags to a Panty Pad ‘Rose’ Ballgown, a sanitary towel fur coat to 18th century style Powdered ‘Panty Pad’ Wigs.  I wanted to show that I am a mixed media Artist that works with many social issues, these are all very close to my heart and continue to inspire me and evolve as luckily life continues to evolve for me! 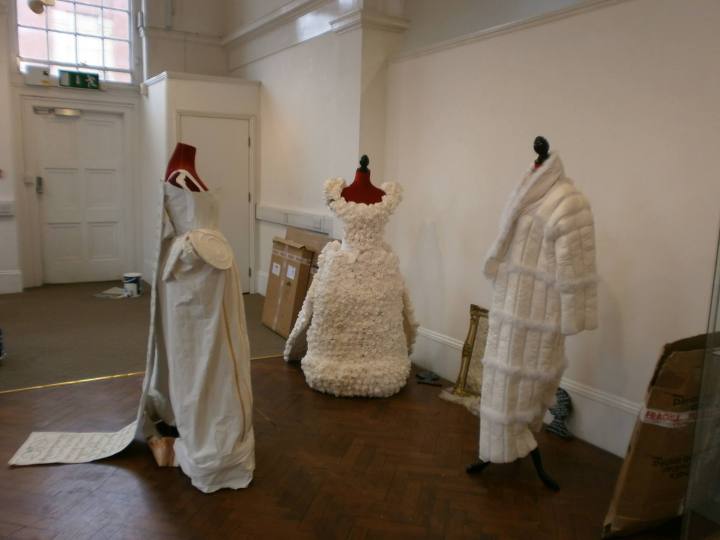 The Mirrors were placed around the work reflecting all who visited, this Exhibition is a reflection of life, past and present and how we are all part of it. People were reminded of this with the Mirrors with writing on, I wanted it to make people feel a connection and more informed when their own faces stared back at them while in this space?

One thought on “A Fabulous Creation / Mandy Webb”